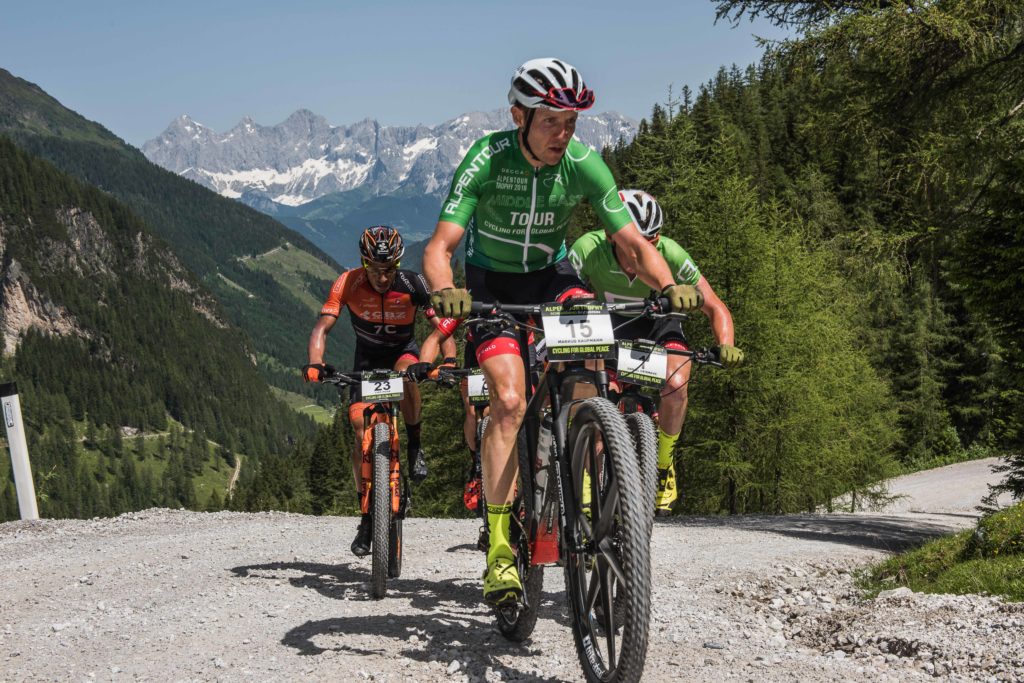 With a second win in the King of the Mountain classification the German Markus Kaufmann claims the stage win on today’s marathon via the Hauser Kaibling mountain ahead of his team mates Jochen Käß and Daniel Geismayr. Tony Longo comes in fourth and holds onto his overall lead despite a two-minute time penalty because of an illegal wheel swap. In the women’s the Belgian National Champion Githa Michiels claims her first stage win ahead of the Austrian overall leader Christina Kollmann-Forstner, who will be at the start tomorrow with a 10-minute lead.

Today’s stage winner Markus Kaufmann said at the finish that the race strategy of his team had been completely successful, “It had been our plan from the beginning to attack Tony Longo, to set a high pace and we really followed through.” The Italian leader Longo had been able to withstand the attacks of the Centurion Vaude team well, however, had a mechanical problem ahead of the long climb onto the Hauser Kaibling. Kaufman and his team mates Geismayr and Jochen Käß had raced at the limit from then onwards to make up as much time as possible.

“This is a team victory and 1-2-3 is of course incredible! It couldn’t be better. I was ahead in the climb and when I looked back, I could only see my team mates, that was awesome”, said the 36-year old Kaufmann today.

Daniel Geismayr is now second overall behind Tony Longo and admitted that his team had benefited from the mechanical of the Italian, however, was also happy about the team success. He also said that he had mixed feelings about tomorrow’s time trial. “In 2015 I was in the lead and my chain snapped on the first steep section, it can be over much faster than you think”, said the 28-year old Austrian National Champion and last year’s winner. Of this year’s rider field he said that the level was very high, however, that this was a real treat for him. “It is really motivating when there are so many strong riders in the race, you really get to push yourself. This is the most fascinating part of this sport for me. The top five are so close together this year and it’s cool when every second counts. If you really have to fight for a victory, that’s the exciting bit”, Geismayr said.

This year’s race is therefore dominated by two teams: the Centurion Vaude Team with Geismayr, Kaufmann und Käß is in hot pursuit to catch up to the overall leader Tony Longo and his Wilier Force 7C Team. A technical race mistake then set Longo back by two minutes and will make tomorrows individual time trial extra thrilling. An illegal wheel swap by Longo after his mechanical problem caused an official complaint that was lodged with the race committee by the International Cycling Federation (Union Cycliste Internationale – UCI). With its S1 classification the Alpentour Trophy is one of the most renowned stage race in Europe.Tony Longo is a climbing and time trial specialist and will be at the start of tomorrow time trial with a gap of 1:22 minutes.

Team spirit at the alpine Alpentour Trophy adventureWhilst the majority of participants are competing in the solo classifications, about one fifth of the field is part of the so-called “Adventure” double-team categories. The riders stay together all day and can therefore not only motivate each other but also share the racing experiences together.

In the women’s the two German riders with Denise Möderl and Kristina Schollerer are leading in 26:06:42 with a solid lead of 3 hours, whilst in the Mixed Teams it is much tighter: the two Austrians Barbara Mayer and Philipp Reindl are leading with a race time of 23:30:57 by half an hour ahead of two Dutch riders and six further mixed pairs.

In the men’s double, which has a strong Austrian representation, two riders from The Netherlands are about one and a half hours ahead of their chasers: Maik van der Heijden and Roel van der Stegen are leading with 18:58:35 in their age group and among all men’s teams overall.

The individual time trial will start at 9:30 tomorrow in reverse order of the overall classification and will release the riders in regular time gaps onto the track.