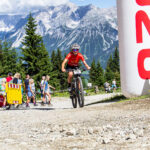 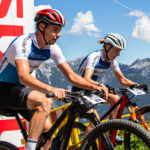 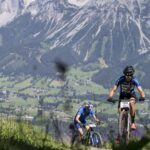 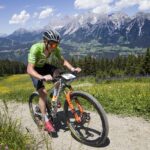 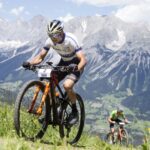 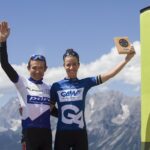 Paez and Steinburg are the 2022 overall winners

Estonian Greete Steinburg and Columbian Leonardo Paez managed to defend their overall leads at the final day of 23rd Alpentour Trophy. The ultimate stage was a uphill time trial from Schladming up to Planai, where the finish area was situated at the Schafalm. While Paez landed his third overall win, for Steinburg it was her debut on top of the standinds. Austrian Daniel Geismayr finished second at the men’s elite and put himself on the podium as only local rider.

„The shape for this race was point perfect. I’m happy, had the best legs and celebrate my third victory”, explained Paez, who won the stage race for the last time three years ago. He also secured his third stage win this year with the fastest time at the race against the clock uphill to Schafalm. In the overall standings he had a lead of over ten minutes ahead of Geismayr.

“Leonardo was in a league of his own. I’m happy with my second place. I did no mistakes. It is a tough race, but we athletes feel quite comfortable here. It is a perfect organisation”, said the Austrian, who rode four constant days and secured his spot on the podium. For the third men there, Belgian Frans Claes it was a tough battle. He finished ninth on the last day but kept a gap of 1:29 Minutes ahead of Italian Tony Longo.

Former Austrian ski jumper Andreas Goldberger needed 1 hour and 37 minutes to get from the bottom of the hill up to the Schafalm. “It was very tough. The heat was exhausting, it felt like in an oven. But for me that was a perfect preparation for Australia”, the Austrian told. In November he wants to take part at the Crocodile Trophy, a eight day long stage race.

Steinburg defended her overall lead with a fourth place on the ultimate stage. It was her first win at the Alpentour Trophy. „I didn’t expect that. I was really suffering uphill, but at the technical parts and in the downhill, I was quite good. To be fast at this race, you must be able to climb and descent good”, explained the Estonian.

Her second stage win at this year’s edition celebrated German Vanessa Schmidt. She won the final stage to Schafalm and climbed in the overall standings on the second place. “I really celebrated the last day. From the beginning of the tour, I was focussing on this day. It went better from day to day and now I’m really into the stage-race-mode”, smiled the 31-Year-Old. Swedish Nellie Larsson, second of the day, finished third in the overall standings. German Tanja Priller completed the stage podium as third of the day.

A good conclusion of his event draws the head of the organising committee Gerhard Schönbacher. “We have a good partnership with the region, and I really like the warm welcome we get here every year. We work well together with all the stakeholders here and it doesn’t feel like work being here”, smiled the Austrian. The 24th edition of the race will be held in June 2023.