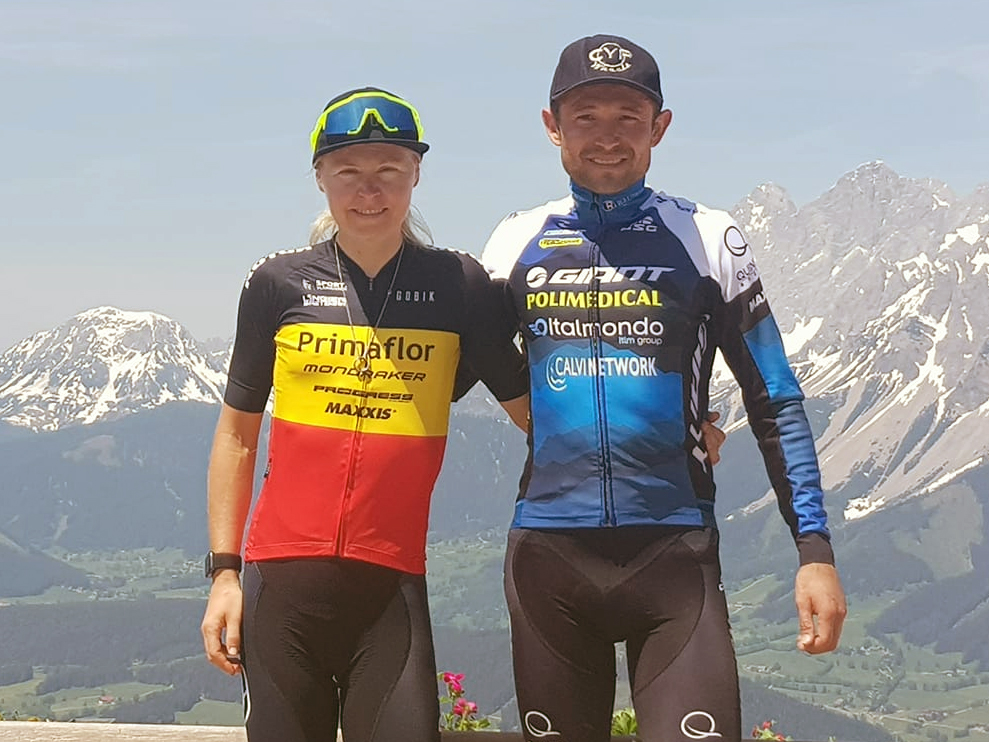 Githa Michiels and Leonardo Paez are the big winners of 21st edition of Alpentour Trophy 2019. The Belgian and the Colombian defended their leads at the ultimate day, a mountain time trial to Planai, of the four-stages-long mountain bike race in Austria at the elite categories. Three out of four day wins went to them and so they celebrated a superior overall victory. While it was Michiels maiden victory at the Trophy, the Columbian won his second title after 2014.

Leonardo Paez was again unbeatable in the 9.4 kilometres long time trial up from bottom station of Planai mountain railway to Schafalm. It took the Columbian 45:36 minutes to climb the 1.150 metres of elevation. He scored the fastest time ahead of his team mate and fellow countryman Diego Cuervo.

„My legs felt incredible good here at Schladming. I’m very happy with my second win, especially as it is five years ago since I won here”, told the recent winner of the men’s elite. Third place at the time trial went to Austria and 29-year-old Daniel Geismayr, who scored another podium at the ultimate day.

„I felt good and I found a good rhythm uphill. But again there was no chance to beat the Columbians. My shape is getting better day by day and I’m glad who the race unfolded after my hand injury”, reported the winner of 2017, who suffered a scaphoid fracture one month ago: “It would be presumptuous if I could win directly after the injury break.” In the overall classification he was fifth.

Second place went to Italian Daniele Mensi ahead of Cuervo. Behind them, German Jochen Käß finished fourth overall. He also scored the fourth-fastest time uphill to Schafalm. “I lost to much time at the first day, so it was impossible for me to finish on the podium of the overall ranking. I had a good time trial and after my broken collarbone in March I’m getting better and better”, told Käß. Sixth place went also to Germany and marathon specialist Markus Kaufmann. Three-time World Champion Alban Lakata from Austria finished ninth.

It took four stages until the superior leader at the women’s event, Belgian Githa Michiels, was beaten at the 21st Alpentour Trophy for the first time. She won the overall ranking by a lead of 20 minutes, but lost at the final time trial against Italian Maria Nisi. She was 17 seconds faster than Michiels and took her maiden stage win in a time of 59:15 Minutes at Planai.

„It was a wonderful week for me. I’m really glad, that I managed to win a stage. Githa was unbelievable strong and so it is a big honour for me to take the victory today”, the Italian was excited. There was no disappointment for Michiels, who won the overall classification and finished second in the time trial. “It was tough days here. I felt good each day. It was a little bit difficult for us today, cause we catched some slower riders and I had to stop for some seconds because the track was blocked”, summed the Belgian up. With some wistfulness, because of the mere seconds she missed her perfect week with four stage wins: “It is a pity, but I’m really happy. It was a great week and I managed to score some good points for my Olympic dream.”

An excellent performance showed German Stefanie Dohrn, who finished third in the 9.4 kilometres long time trial. She missed second-placed Michiels by only one second: “I didn’t expect a podium finish today. My legs felt good, but I wasn’t sure if the time was good enough. My focus was on the mountain and I had a good support from the fans at the side of the course”. Day by day the young German improved, after finishing 9th on the first stage, then 7th, 5th and 3rd on the final day. “It is a pity, that there is no fifth day. That would have been great”, smiled Dohrn. Behind the German her fellow countrywomen Janine Schneider and Olympic Champion Sabine Spitz finished fourth and fifth.

Sixth place went to Austrian Angelika Tazreiter. She defended her third overall ranking at the final time trial behind Michiels and Nisi. “The steep part of the time trial almost pulled my plug. It was a tough fight and I’m glad that it worked out and finished third”, explained Tazreiter, who was pictured by her efforts at the 21th Alpentour Trophy. She travelled to Schladming with a swollen knee and was surprised by her result: “I’m very happy. It didn’t looked good after the first day, but it went better and better from day to day and with my two second places at 2nd and 3rd stage and the overall result I can be really proud”.