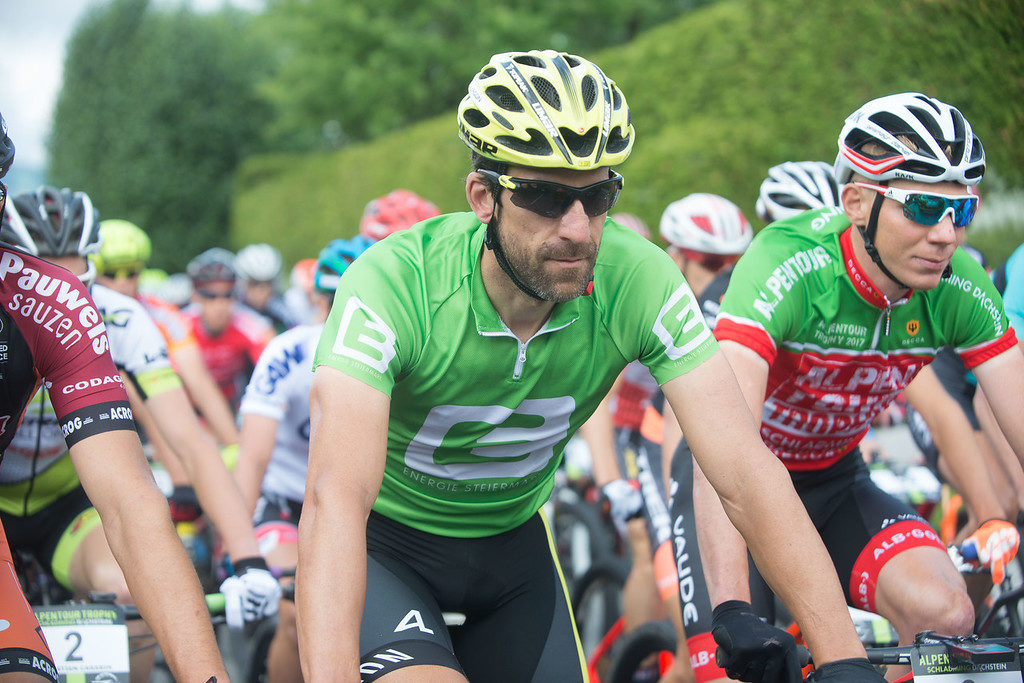 Austria’s biggest mountain bike stage race, Alpentour Trophy, starts on Thursday. The 21st edition of the race is scheduled in Schladming. 200 Kilometres and 9.000 metres of climbing are planned for the 350 participants from 30 different countries. The venue of the Alpine Ski World Championships 1982 and 2013 will be in the center of edition again. The start and finish area is situated at the mountain railway of Schladming.

The field of participants of the UCI stage race is leaded by three-time World Champion Alban Lakata. The Austrian is a world leader in marathon for the last decades and wants to fight for the overall ranking: “I always have felt happy here and the race is convincing me every year with its familiar and relaxed atmosphere and a fantastic organisation”, reports the 39-Year-Old. After the winter he switched to German outfit Team Bulls and was racing at Cape Epic for them: “It is always a big changeover if you get to a new team. You have to find a way in your new team and accustom to your new colours. My shape was getting better and better from race to race now.”

With last year’s runner-up Daniel Geismayr, there is a second Austrian and local hero aiming for glory at this years Trophy. The 29-Year-Old is doing a double-track season. While in mountain bike he is racing for Centurion – Vaude from Germany, he is also riding on the road for the Continental Team Vorarlberg – Santic. After a crash at the Tour of the Alps he broke his scaphoid bone and is coming back from an injury break. In the last weeks he prepared at Livigno for his try to get another Trophy win like in 2017. “I haven’t been racing for a while, so I want to get back into the rhythm. The trophy will be a determination of my shape”, explained Geismayr. He knows the advantages of the short ways at Alpentour Trophy: “The route is a real vision and also as amateur you can have a great experience and a lot of fun in those four days without a big financial effort”.

Another top star of mountain bike marathon is Jochen Käß. The German is team mate of Geismayr and is also aiming for a top spot at this year’s Trophy. Partnering Markus Kaufmann he won last summer’s Bike-Transalp. This season the ways of the two German riders divided, because Kaufmann went to Texpa – Simplon. Beside Geismayr they are the hottest potatoes in this year’s edition

The women’s elite field is lead by the Grande Dame of mountain bike. From 2004 until 2012 Sabine Spitz collected three Olympic medals, a full range consisting of gold, silver and bronze. She became World Champion in marathon and cross-country and was elected in 2003 and 2008 as Cyclist of the Year by the European Cycling Federation. Last year she did her last World Cup race and finished her cross-country-career. But she kept on doing marathons. She will be the big favourite at the women’s elite overall ranking.

“She is a true greatness of this sport. It was fabulous to watch her riding on the highes level for so many years. I have been following a lot of her races and it is a big honour to be on the start line beside her at the Trophy 2019”, explained Angelika Tazreiter, who is the current Austrian Champion in mountain bike marathon. Two years ago she won a stage at the Trophy: “To finish on the podium would be a dream considering the strong field this year”.

For most of the 350 participants wins, UCI points and prize money are not priorities. The big adventure of mountain bike, what they can experience in those four days, is the common reason for them to ride at the Alpentour Trophy. A third of the athletes are racing at the Alpentour Trophy Adventure, where the 200 Kilometres are completed as a two-persons team.

The Trophy 2019 starts with the longest and hardest stage on day one, where the route will take them to Dachstein. The athletes have to ride 70 kilometres and climb 3.100 metres of altitude on the queen stage on the first day. Second stage this year has a new route because of the wintry conditions at Giglach Lakes. The stage is now including the climb to Reiteralm and has the same kilometres and metres of climbing as the original. Hauser Kaibling is on the schedule for the third day and on final day the overall classification will be decided again in a 14 kilometres long individual time trial from the valley to the top of Planai cable car.