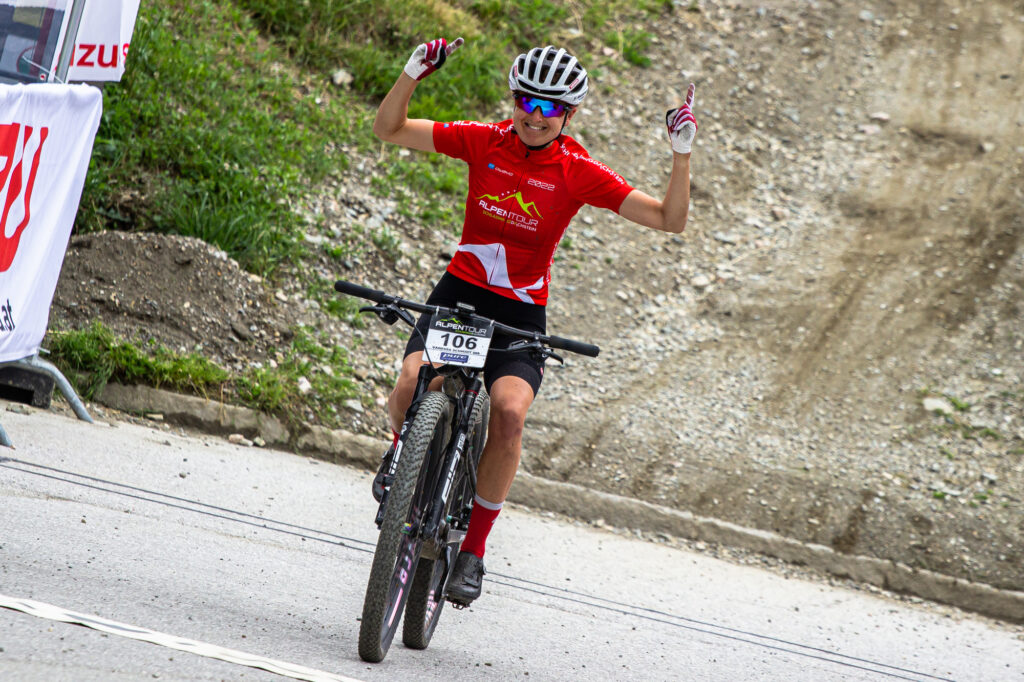 The third stage of the Alpentour Trophy, situated in the region of Schladming-Dachstein, produced two new winner faces. Italian Daniele Mensi attacked early with the Dutch Tim Smeenge and they two pulled away from the big favorites. At the end Mensi was able to defend his lead and reached the finish line with an advantage of two minutes. It was his third stage win at the Alpentour Trophy. At the women’s elite German Vanessa Schmidt made it to the top step of the podium, after finishing second on the first day and third on the second day.

„I’m so happy because I haven’t expected to win a stage here. Today everything went perfect”, the German smiled after 56 kilometres and 2.500 metres of climbing from Schladming up to the Hauser Kaibling and down to the Planai stadium. Estonian Greete Steinburg defended her lead in the overall standings, after finishing second, 2:24 minutes behind Schmidt.

„It wasn’t my best day, but I managed to defend my advantage in the overall standings. It is a tough race and there is still one exhausting stage to do”, explained Steinburg. She leads with more than 15 minutes ahead of Schmidt before the final stage, a 13 kilometres long time trial up to the Schafalm. Third place on the stage went to Swedish Nellie Larsson, who is also now third in the standings.

After Columbian Leonardo Paez won the first two stages of the race, Mensi produced a new winners face of the 23rd edition of the Alpentour Trophy. He was dominant from the beginning, attacking with Smeenge. At the final climb he got rid of his opponent and finished solo.

„My legs haven’t been so good at the first two day. Today it was perfect, and I have some ambitions for the final time trial as well”, reported the Italian. His stage companion Smeenge finished second ahead of Andreas Miltiadis from Cyprus. Behind him, Leonardo Paez landed on fourth place. He was 2:04 minutes slower than Mensi, but extended his lead to Austrian Daniel Geismayr, who finished seventh.

„My task was to control and not to lose any time. At the end I managed to extend my lead”, said Paez, who will go into the final time trial with an advantage of 8:49 minutes to Geismayr. 13 kilometres and 1.250 metres of climbing are the final challenge for the Columbian on the last stage. Start of the individual time trial is at 09:30 and the athletes will start in reverse order of the overall standings.

Menu
This website uses cookies to improve your experience. If you continue to use this site, you agree with it.
Ok