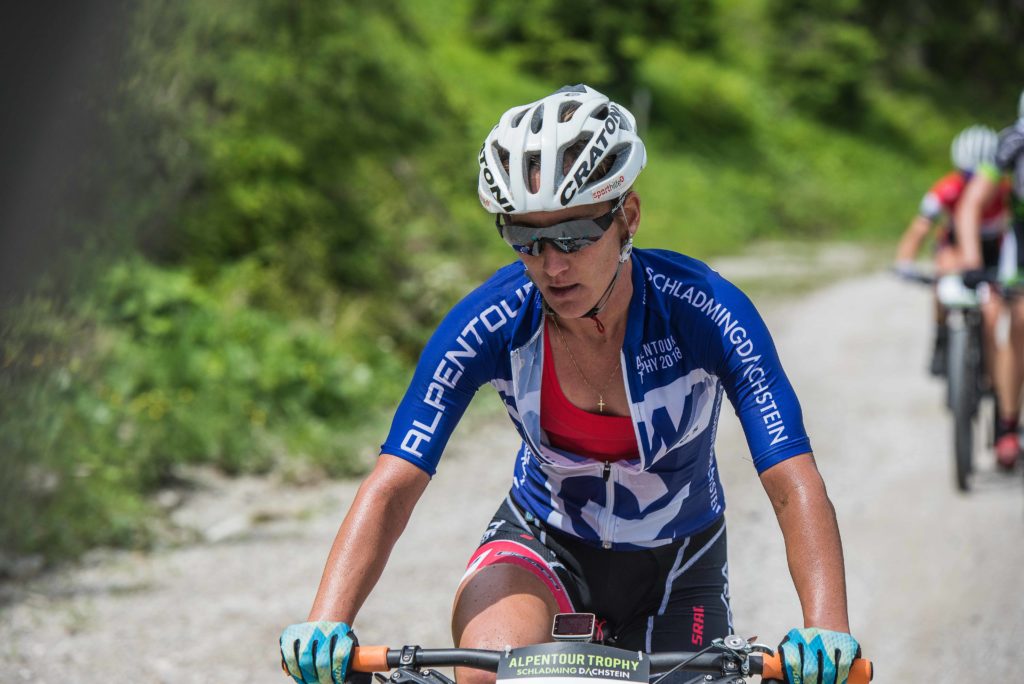 The 20th Alpentour Trophy took place from 7th to 10th June 2018.  The four-day stage plan took the participants into the Alpine surrounds of the Schladming-Dachstein Region: almost 200km and 9,400 vertical meters had to be conquered. The Austrian Christina Kollmann-Forstner, originally from the region, won her ‘local race’ for the third time. This year ahead of the Belgian Githa Michiels and the Czech rider Jitka Škarnitzlová. Also the Italian Tony Longo was celebrating his third overall win: he claimed the Alpentour Trophy title ahead of Austria’s Daniel Geismayr and the German Markus Kaufmann in a thrilling finish to the last meters.

For four days it was all about the mountain bikers in the Schladming-Dachstein Region – 34 countries were represented in Styria for the 20th Anniversary edition of this stage race. For the first time the Alpentour Trophy was promoting global peace as a partner event of the “Middle East Tour – Cycling for Global Peace”. The Austrian Alpentour Trophy organiser Gerhard Schönbacher is also the main driver behind this peace project, which will take place for the first time in March 2019. He has already succeeded in inviting Jordanian, Palestinian and Israeli riders to Schladming, who competed together in the international field of riders of the Alpentour Trophy.

“This shows that Sport knows no borders! For athletes the sports performances and the mutual experiences at event like ours are what counts and this is a beautiful thing”, said Schönbacher today. Himself an ex-road pro racer, including in the Tour de France, he said that he was impressed by the achievements of his participants.“The Alpentour Trophy is a true challenge and for us as organisers once again it has been a pleasure to witness how elite and amateur riders conquer each stage together and visibly enjoy the race tracks and the landscape in the Schladming-Dachsteinregion”, he added.

Christina Kollmann-Forstner and Tony Longo are our 2018 winners

The riders experienced a tour through the Styrian Alps with start and finish in Schladming for three days: Ramsau and the Dachstein past the Türlwandhütte on Thursday, Hochwurzen and the Giglach Lakes plateau on day two and the Hauser Kaibling mountain with a King and Queen of the Mountain classification at the Krummholzhütte for stage three. The crowning finish was a 14km and 1300vm indiviual time trial up onto the Planai Mountain with finish at the Schafalm.The two elite winners are Tony Longo from Italy and the Austrian Christina Kollmann-Forstner, who both claimed themselves an Alpentour Trophy victory for the third time.Christina Kollmann-Forstner won with three stage wins and said it had been important for her to claim especially the final time trial stage, which she successfully did in 1h07:28.

“Even though I had a solid gap this morning, similar to last year”, she said. She said that she hadn’t been able to enjoy the views, but that a ‘local race’ was special, “It was great to have my family and so many people that know me on the side of the track and cheering for me.”

Elite Men: a thriller until the very end

In the Elite Men’s it was a thriller up until the last few meters on the Planai Mountain. The top three in the the classification Tony Longo (ITA), Daniel Geismayr (AUT) and Markus Kaufmann (GER) made sure to keep everyone on the edge of their seats until the end. Longo had been penalised by 2 minutes after the third stage because of an illegal wheel change with another rider and went into the time trial with a gap of 1:22 minutes. Only 38 minutes separated him from runner-up Geismayr after 14km at the finish. It had been hard and he hadn’t felt as good as on the previous days the 33-year old admitted. “The time penalty really upset me, because I didn’t think it was fair – we are a big team and always ride together and are registered in two separate groups with the International Cycling Federation UCI. The rider who helped me out was in the other group and in my opinion that was a minor fact, however, it also motivated me today”, said Longo at the finish. He was really happy with his victory and third title and this overall win was the thing that counted for him the most. He congratulated his runner-up Daniel Geismayr, who won today’s stage, and his team for an exciting race.

Geismayr said that he was content with his second place, especially after a stage win on the final day in 53:48 min, “Today I was really able to switch on my legs like I’m used to. After these three days I would like to congratulate Tony Longo, it was a closely-contested race! I love those kinds of races, when it’s all about the final seconds and my team and I were in good form, the event has been great, as always!”

Amateurs, teams and e-Bikers beaming with joy at the finish

The Alpentour Trophy is one of the most renowned mountain bike stage races in Europe with an international UCI ranking S1. This means that for elite racers there are not only a lot of points up for grabs, but also a considerable prize money pool. A majority of the field, however, participated in the amateur classifications, which offered solo and team categories as well as age groups for male, female and mixed teams.

The Alpentour Trophy offers its riders very special racing highlights in a unique Alpine setting through untouched nature thanks to the support from local tourism organisations as well as property owners who allow access to their land. However, all these experiences don´t come easy: steep climbs as well as fast and technical descents demand everything off the riders.

Once again on the final day of the Alpentour there was also an e-Bike Challenge and after the so tight result from last year, when an e-Biker beat the elite stage winner by only 24 seconds, this year it was the muscle power of Daniel Geismayr that was stronger in the time trial. The Elite winner took 4:28 minutes off the e-Biker’s result – Koenraad Vanschoren is a race organiser himself and said that he uses his e-Bike to check the race track of the Belgian MTB Challenge.

“These e-Bikes are great, I am not in great shape at the moment and such a hart track with out e-power would have been doable, but I wouldn’t have had as much fun riding it, that’s for sure!”, he said.In the women’s it was none other than Janine Flock, the Austrian skeleton racer and eight-time National Champion, who finished in first on an e-Bike with a winning time of 59:26 Minutes. She had been overcome with “incredible happy feelings” and it had been a “pleasant ride”, the 29-year old said. “There were really steep sections and with an e-Bike you can really dial it to your needs and use all the settings to have a great ride – if you want to put in more pedal power, you can adjust the support and if you want to ride with less effort, that is possible also – this is an important factor when we train. You can have a training effect and increase your heart rate and fitness without too much damage to your muscles”, she explained. She also added that the fun aspect was very important because with e-Bikes riders of so many different abilities were able to ride have fun experiences and share them with family and friends.

In this spirit the Alpentour Trophy will return to Schladming again in June. The 21st edition of the event will once again offer the classic stages to excite local and international visitors alike.