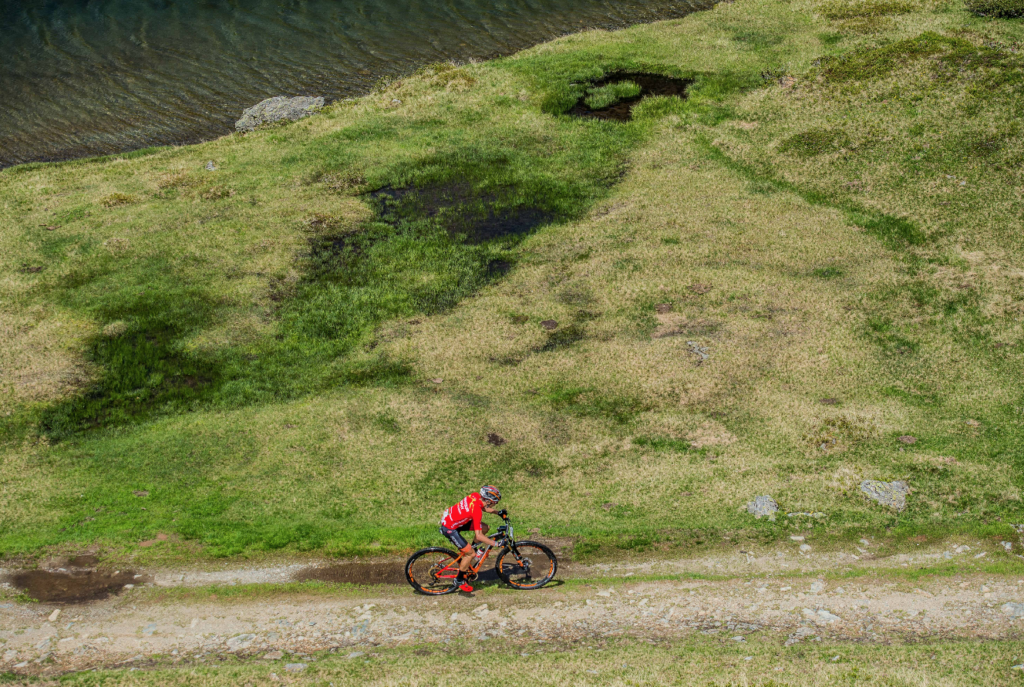 Tony Longo wins the stage and defends his overall lead. Geismayr (AUT) and Kaufmann (GER) are on second and third spot – today and overall. Christina Kollmann-Forstner defends her overall lead. Githa Michiels from Belgium comes in second today ahead of the Czech racer Jitka Skarnitzlova. Elite Master and amateur classification leads claimed by the international field of riders with Costa Rica, Belgium and Austria ahead.

The riders at the finish all agreed: today’s stage up to the Giglach Lakes via the Hochwurzen mountain had been an amazing experience and had everything that makes a mountain biker’s heart skip a beat. Steep ascents, technical descents, incredible views into the Alpine surrounds and all that under sunny skies. The lead group had stayed together for quite a while, however, on the flat ride towards the second climb it had been the Italian Tony Long who attacked and stayed ahead. With a winning time of 2:48:43 he took his second stage win this year across the line at the Planai Stadium in Schladming and defended his overall lead.

The team mates Daniel Geismayr and Markus Kaufmann claim the stage and overall places two and three, respectively. They finish right behind each other and now have a gap of 5-6 minutes to Longo. Jochen Käß is now in fourth overall and the Austria Uwe Hochenwarter secures himself the fifth place overall. Today’s fifth was the Columbian racer Luis Mejia.

“Again I felt really strong and I was able to get away on the second climb”, said the 33-year old Italian Tony Longo, who praised his team riders who had supported him in the flat sections.

Geismayr said that it had been a beautiful stage and that he was content with his achievement as well as the relatively small gap to the stage winner Longo, “A really beautiful mountain bike stage today, you really had to have good technical skills. There were a lot of muddy and rough sections at the top and as a good rider you had a real advantage and could make up a lot of time on the plateau, not only on the climbs.”

Content with his third place was also Markus Kaufmann, who was enthusiastic about the beautiful landscapes, “The views were incredible up near the lakes. I toyed with the idea of just stopping and sitting down on one of the benches to enjoy it.” Earlier in the day he had struggled, however, he had been able to find his rhythm soon to take out the King of the Mountain classification on 1840m above sea level.

The women’s leader Christina Kollmann-Forstner said that she had a ‘safe’ race today, “I started the race conservatively today and wanted to see what the field around me was doing.” Onto the Queen of the Mountain classification they had a front group of three women and shortly before the timing point she had been able to get away. Between the Czech rider Jitka Škarnitzlová and Githa Michiels from Belgium the battle for second and third place overall is on. Kollmann-Forstner has a lead of more than 12 minutes ahead of Škarnitzlová. Angela Parra Sierra from Columbia and Maria Cristina Nisi from Italy are also still in contention.

In the Elite Master category Pérez Mata Eddy from Costa Rica is in the lead ahead of the Austrians Josef Hausleitner und Andreas Dollinger.

In the men’s amateur ‘sports class’ the Belgian Arne Tureluren holds the overall lead by 6:32min ahead of Benjamin Michael from Great Britain and Gonzalo Chacon Barquero, also from Costa Rica. The Austrian Mario Färberböck from Salzburg is overall in fourth.

In the amateur women the Austrian Jacqueline Meister has a solid 17-minute lead ahead of Katrin Benz from Germany. The Finnish rider Tina Idström is overall in third.

Tomorrow, Saturday, will be the last marathon stage ahead of Sunday’s individual time trial. The third stage will take us onto the Hauser Kaibling mountain via 53km and 2200vm.