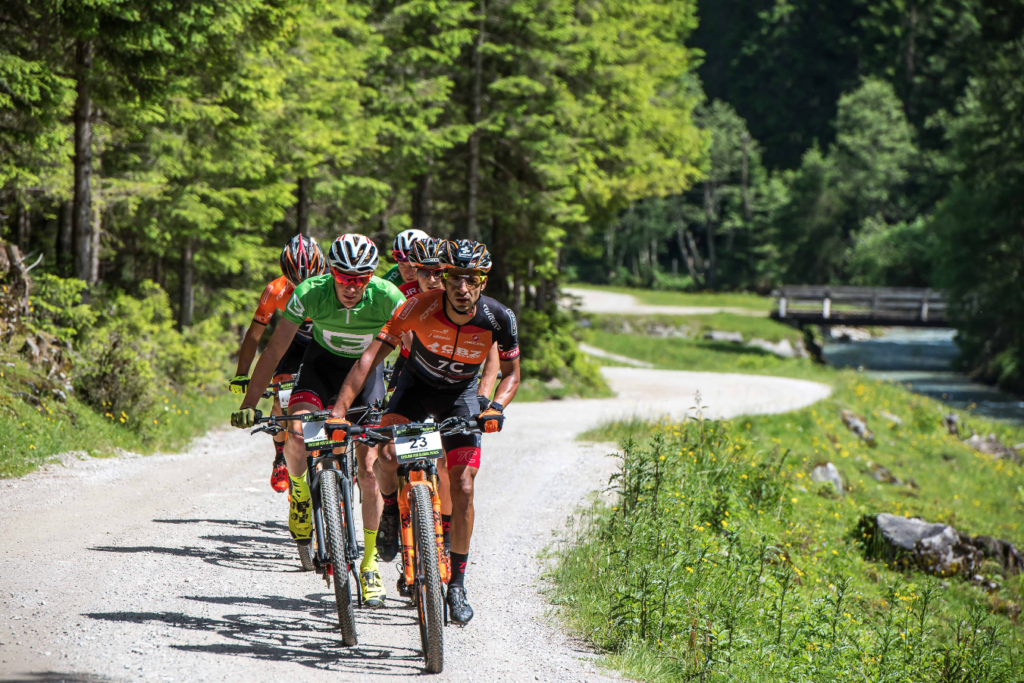 This year’s Alpentour Trophy started in Schladming today and the 2016 winner Tony Longo from Italy wins the first stage in a solo race ahead of the Centurion Vaude MTB Team with Markus Kaufmann (GER), Daniel Geismayr (AUT) and Jochen Käß (GER) in second, third and fourth. Fifth is the Belgian Jens Adams. The local racer and title defender Christina Kollmann-Forstner wins in the Women’s competition ahead of the Czech racer Jitka Škarnitzlová and Angela Parra Sierra from Columbia.

The organisers of the 20th Alpentour Trophy were successful not only to bring an international field of racers from 34 countries to the anniversary edition of this race to Schladming, but also to really set an example for global peace. Among World and National Champions were Jordanian, Israeli and Palestinian cyclists at the startline in Schladming. The athletes from the Middle East will participate in the Alpentour in preparation for the Middle East Tour. This achievement is the result of a bigger peace project. The Alpentour Trophy is a partner event of the first sports event for World Peace: the Middle East Tour – „Cycling for Global Peace“. After four years of intense preparations, the Middle East Tour (MET) will start on 8th March 2019 in Amman and finish on 14th March 2019 in Jerusalem.

The riders from the Middle East had been amazed by the landscape in the Schladming-Dachstein Region and the racing experience of today’s stage and also surprised by their own personal achievements said organiser and main initiator of both races, Gerhard Schönbacher: “They all rode in the midfield and are really excited to be here. For me a dream will be coming true when cyclists from all over the world will be riding together to promote global peace at the Middle East Tour in 2019. The fact that we have athletes from the Middle East here together already at the Alpentour really proofs that in sports there are no borders.”

Riders are pushing their limits

The four-day stage plan will take the participants through the pristine Alpine landscape of the Schladming-Dachstein region with almost 200 km and 9,400 m of elevation on the tour program. On today’s plan were 70km and 3100vm in the Ramsau-Dachstein Region and the King of the Mountain timing point once again was at the Türlwandhütte on 1700m above sea level, below the highest mountain in Styria, the Dachstein.

A rider who knows every stage at the Alpentour Trophy inside and out is today’s Elite Women’s stage winner, Christina Kollmann Forstner. Now living in Upper Austria, she grew up in the Schladming Region and said of her ‘local race’ that knowing a race track so well provided both advantages and disadvantages. “I really know every meter here and know exactly what lies ahead. However, if you are struggling during a stage you also know which and how many climbs are still ahead, which can be tough.” Of the female line-up she said that it was a strong one and that she was content and happy about her almost 8-minute lead ahead of her runner-up Škarnitzlová.

The Italian Elite rider and today’s male stage winner Tony Longo will start tomorrow’s second stage with a gap of 3:47min. His legs had felt really strong today and he had fun, he said at the finish, however, also admitted that he couldn’t foresee how well he would recover from his solo race today.

“Tony Longo was flying today”, said last year’s race winner and today’s third overall, Daniel Geismayr from Austria, who finished with his German team mates Markus Kaufmann and Jochen Käß who came in second and fourth, respectively. Geismayr, however, said that it hadn’t been a team race, “Today everyone fought for himself, Tony was gone at the first climb and we could catch up and the lead in the chase group constantly changed.”

The Alpentour Trophy is one of the major European mountain bike stage races and offers not only an athletic challenge during the day, but also a very social evening programme. Each day ends with a communal dinner at the Congress in Schladming – more than 600 racers and supporters as well as staff will be treated to local and international culinary specialties.

Tomorrow the second stage will take the riders on a 61km and 2600vm marathon to the Giglach Lakes on a beautiful plateau on almost 2000m above sea level. The King of the Mountain point will be at the Hochwurzenhütte.